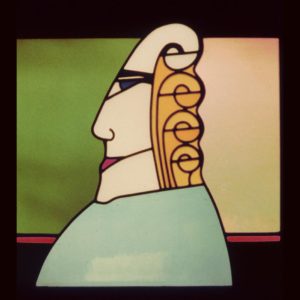 I grew up in the burbs of Portland Oregon
There was a creek in the back yard.

Painted my first painting when I was 13 after seeing my brother paint
He’s a filmmaker now.

In high school I was lucky and got kicked out of 2nd year algebra. I was ordered to the art room where I met a great art teacher who encouraged me.

At the same time I also had an English teacher who would read my attempts at prose and thought I had some talent.

I got interested in stained glass when I was a freshman in college
Switched to art from English – left college after two years.

Stumbled into glass blowing at Portland State, which I loved but wasn’t good at
And I didn’t have a thing to say with it.

Went back to flat glass. Took a class from a German designer
And immediately did the opposite of his teachings, he was too strong.
Though I did like the way he responded to architecture.
He cared and really worked on his designs.

In 1975 the Oregon art commission smiled on me and I got to make a leaded window for a food stamp office. Two cartoon weight lifters. I really liked getting paid up front plus I had to design a steel frame for the thing which forced me to work with welders.

I never could have been a gallery artist. But doing something different all the time suited my learning style – which was the “couldn’t sit still in class” style.

I’ve been working in metal mostly for the past 25 years. Art has been my only job since 1980. I have work in 10 states and have finished over 50 public art projects. 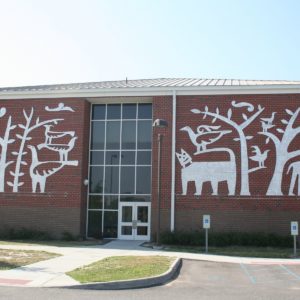