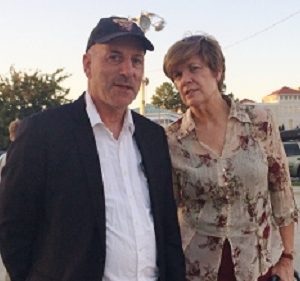 For the past 15 years, I’ve often worked with a visual vocabulary that doesn’t immediately telegraph its status as art. As my starting point, I like to use blemishes, sites, and vernaculars that have been marginalized in some form: the controlled chaos of industrial infrastructure (Open Channel Flow, Chroma Booster, & Upper Blush), the abandoned limb of an amusement park ride (Greenway Blueway Byway Skyway, Nautical Swing & I ought to), or the aging tree in a public park (Woozy Blossom & Cypress Landing). I take these abject artifacts and retrofit them to create a micro public square. The idea is to surprise while fostering a sense of community around an unlikely object or site.

In the 1980s, I switched my studio practice from primarily sculpture to the production of video works, reworking the structure and style of television storytelling with comic narratives that played off conventional genres—documentary, fairytale, melodrama. Employing fragmentation and disjunction as storytelling devices, I intercut several seemingly unrelated anecdotal stories into cohesive, if nonlinear, narratives. My focus on video culminated with a solo show, From Receiver to Remote Control: The TV Set, at the New Museum in New York in 1990. Beginning with my fellowship at the American Academy in Rome (1991-2), I integrated my skills as a storyteller and sculptor by creating intimate observed worlds in miniature. For the past 15 years I have taken these ideas, changed the scale, and extended the possibilities for site and a chaotic viewership by producing temporary and permanent public art, which has been described in various ways, from “urban earthworks” to “industrial baroque settees.” 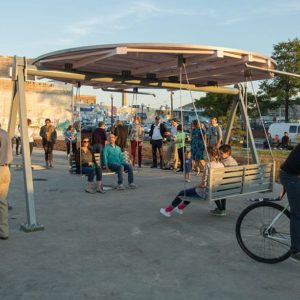