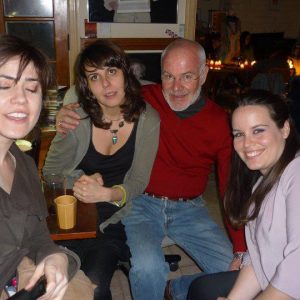 Rose Gema Doughty is a bicultural (Spanish-American) artist who examines identity in a contemporary world through Performance Art and multi-medial presentations. Most of the series she generates have underlying eco-social messages rooted in Feminism and Deep Ecology. The early investigation of international nuances and diversity from childhood into adulthood incited Doughty to explore places, people and the rights of all entities as central theme in her work. Recently, she received two grants for site-specific Performance Art in Castilla-La Mancha and Andalucia and is an active, exhibiting, and award-winning artist in both the US and Spain.

Doughty also serves as an educator. Since 2002, she has taught for the Dept. of Art at ODU and Thomas Nelson Community College. She has lectured lower and upper lever classes, primarily Photography and Digital Art. She holds three Associates in Fine Arts, Liber Arts, and Commercial Art; a Bachelor of Art in Fine and Performing Arts’ and a Master of Fine Arts in Visual Studies. Her passion for social justice (education as a human right) inspires her to spread art to the community at large, through outreach programs for people of all ethnical and socio-economical backgrounds. Among the institutions she branches out to art local art centers, juvenile detention centers, and lifelong learning societies.

NORFOLK–Artist and parapsychologist Rosa Gema Doughty presented Eco-Parapsychology: Investigating Paranormal Environmentalism on the Chesapeake Bay at The Selden Gallery April 6th though the 27th. This one-person addressed regional eco-social issues in the month when Earth Day is celebrated globally. The artist performed “Jamestown Unsettlement” during the opening reception.
Eco-parapsychology is the unique scientific study of activities inexplicable to physical laws, in particular paranormal environmentalism. Although several forms of study fall into parapsychology, such as telepathy and psychokinesis, eco-parapsychology delves exclusively in the investigation of apparitions. The super-normal manifestations of dead people, religious spirits, and mythical creatures performing environmental acts, especially along the Chesapeake Bay, are the subjects of Doughty’s show. This multi-media show utilizesd media consisting of theatrical make-up, handmade garments, props and photography.