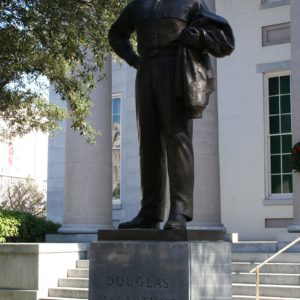 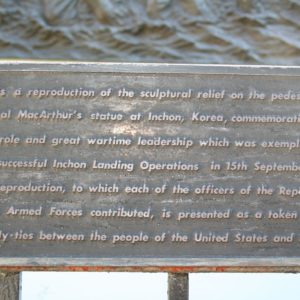 Compiled by MacArthur Memorial intern Chavon Freeman, Virginia Wesleyan College, April 2009
This bronze statue of Douglas MacArthur, by noted artist Walker Hancock, is a duplicate of a statue of MacArthur at the United States Military Academy at West Point which was unveiled 11 September 1969. Only two castings of this particular statue have ever been made.

The work depicts Gen. MacArthur ca. 1944 in his famous khaki uniform and cap, holding his leather flight jacket. The statue is 8’ tall and rests on a 5 ½’ tall granite base. The base houses a time capsule which contains various MacArthur, Norfolk and MacArthur Foundation memorabilia.

Obtaining The Statue
The statue was purchased by the Gen. Douglas MacArthur Foundation at a cost of $36,000 and was unveiled 18 April 1970. Gen. MacArthur’s wife, Jean, and their son, Arthur, Virginia Governor Linwood Holton, Ambassadors of 11 foreign nations and a color guard and band from Ft. Monroe were took part in the dedication ceremony.

The statue again underwent a thorough cleaning and restoration, this time on-site, by Bronze et al of Richmond, VA, in the summer of 2007.