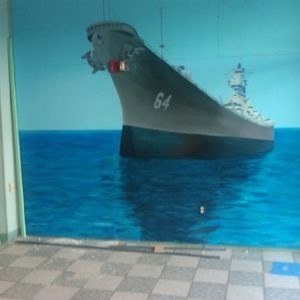 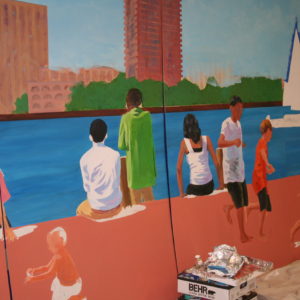 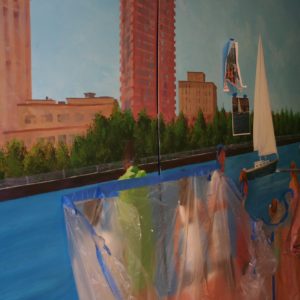 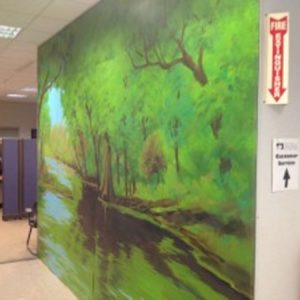 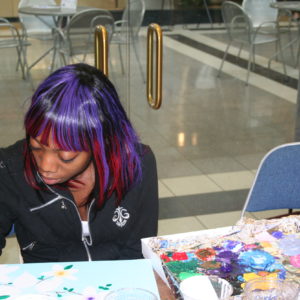 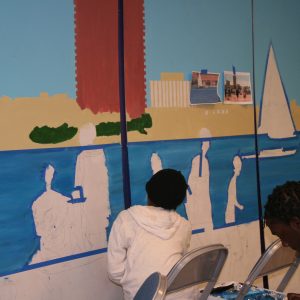 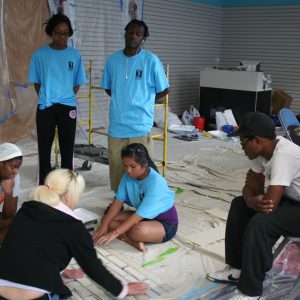 Summer in the City

Vicki Norris along with participants of the City of Norfolk’s 2011 Emerging Leaders program created “Summer in the City” for the Granby Municipal Building.

Four scenic murals depict images from Norfolk’s Town Point Park, the historic battleship USS Wisconsin, the Blackwater River in Isle of Wight County (a source of Norfolk drinking water) and a Mermaid (created from cut, painted, plastic bottle pieces) a reminder of the importance of protecting our environment.

Vicki Norris, a 1990 graduate of the Chicago’s American Academy of Art, and five participants of the City’s Emerging Leaders Program, spent five weeks collaborating on the murals. She was hired by the City of Norfolk’s Cultural Affairs Office to create public artwork on City property. After considering several potential sites, she chose the lobby of the Department of Utilities in the Granby Municipal Building.

Working from a gallery in the Selden Arcade, Norris and her corps of Emerging Leaders discussed the challenges and began their creations. The Emerging Leaders included: Christine Quejada, Tykia Salter, Lavelle Spratley, Ayan Shelton and Kevin Small. Not only did they help with the creation, their likenesses, along with three of Norris’ grandchildren, are part of the Town Point Park mural.

The largest mural of Town Point Park creates a three-dimensional appearance of looking out of a brick enclosure, past the TownBank Dancing Waters Fountain and out onto the Elizabeth River. Norris commends the Emerging Leaders, “…the youth did all the prep work, including priming and applying polyurethane for the murals. It was a wonderful experience and so many people came by to watch while we were painting at the Selden Arcade. We received many compliments on the artwork and how great the summer youth program is.” Those compliments are echoed by the many customers who enter the Utilities customer service lobby.