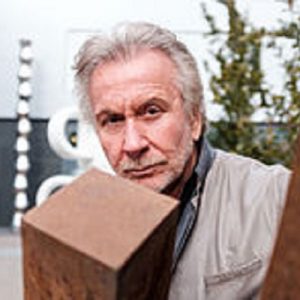 Bernar Venet was born to Jean-Marie Venet, a school teacher and chemist, and Adeline Gilly. He was the youngest of four boys.[2] He was brought up in Chateau-Arnoux-Saint-Auban and had a religious upbringing, aspiring to become a missionary. He had struggled with asthma and academic subjects at school, while excelling in drawing and painting.[3] With the support of a local artist; however, he became interested in painting and drawing at a young age.[4] At age 11, discovering a book on Pierre-Auguste Renoir, he first understood that he might be able to forge a career out of his particular talent.

After several attempts at gaining a formal education in the arts, he worked as a stage designer at the Nice Opera in 1959. In 1961, Venet joined the French Army whilst also starting to establish his style as an artist. During this period, he painted with tar, creating his art with his feet in a gestural style. This work eventually developed into black monochromatic paintings which eschewed all forms of action painting.
Career

88.5 Arc x 8, 2012, Gibbs Farm, Kaipara Harbour, New Zealand
After completing his military service, Venet returned to Nice, where he established his studio and continued to explore painting with tar, creating art with coal, and photography. His first sculpture, Coal Pile, has a restrained and minimal quality.